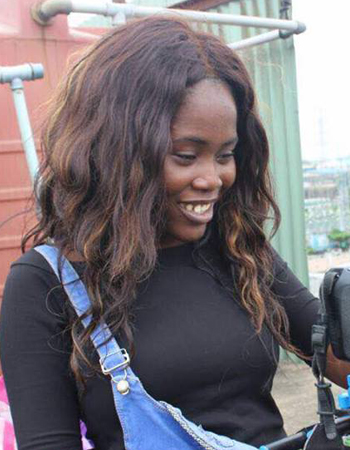 She has a strong academic background as she graduated with a first-class honors degree in History and International Relations at the age of 18 and won a total of 11 awards of academic excellence from Redeemers University. After her service year at Cross River State, she attended the Street Project Foundation Creative Youth Boot Camp, where she explored her talents. She was the lead character at the benefit concert of the Creative Youth Boot Camp titled “JOURNEY OF A THOUSAND MILES” a total theatre performance that had her deliver a 6-part monologue. After the Bootcamp, she was selected by the management of Street Project Foundation to intern at Prodi-G Concepts and to attend “THE IMAGERY PROGRAM” for screenwriting and filmmaking organized by Riverside Production.

Less than three months after the Creative Youth Boot Camp, Moyosore shot her first short film titled “Look Beyond” which she wrote, directed and produced. It is a story about teenage pregnancy and it stars three other Street Project Ambassadors.

Moyosore is also the Founder of THE AFRICAN WRITERS and the maiden edition of the African Writers Meet ’17 event which, features top industry giants and performers is scheduled to hold on October 28, 2017 at the Onikan Youth Centre. Her debut book, “Damaged” a collection of poetry and inspirational pieces for the broken is currently in the works and will be released before the end of the year. She is also a content developer and member of the advisory committee of a fast rising youth talk show series called Emergence.

Moyosore’s dream is to be listed in the Forbes list of 30 under 30 top entrepreneurs and she wants to facilitate a number of social development projects aimed at helping primary school students and undergraduates.