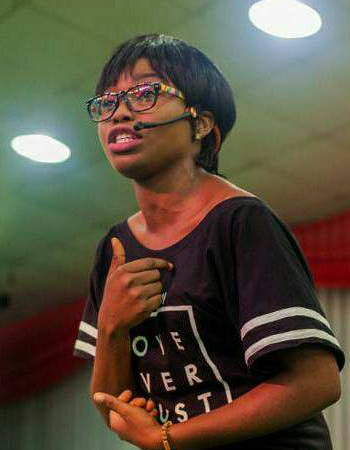 ChidinmaR Osigwe graduated as one of the best participants at the 2017 Street Project Creative Youth Boot Camp having wowed the audience with her spoken word piece titled ” YOU KILLED ME”. She was selected to Intern and be mentored by SPF Faculty and Voice Director Remi Olutimayin, on voice acting. Not relenting after the boot camp she immediately contested at the Brigitte Poir-son poetry competition with the poem ” JUST A METAPHOR” and emerged second runner up. She was also the first runner up of the SOBCA online competition in September 2017 and the Winner of the 2017 Lagos State Ministry of Youth and Social Development talent hunt competition in Spoken Word Category. She has also graced the stage of Life Pointe Church at their 2017 open mic, RCCG royal court ( new wine concert) and RCCG Mercyland assembly (Worship My Lifestyle) 2017 showcasing her remarkable skill.

ChidinmaR’s acting skill was developed at the Street Project Foundation Creative Youth Boot Camp and with this skill she has been able to feature in an AFM Media short film titled “LOOK BEYOND” produced by another SPF ambassador – Faith Moyosore and She is a team member of the fast rising youth talk show series called “EMERGENCE”. ChidinmaR is a Final year student of Accounting at Yaba College of Technology and her ultimate goal is to perform on the global stage as a Spoken word artiste.