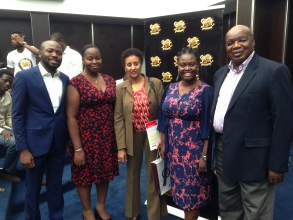 The honourable Lagos State Commissioner for Wealth Creation and Employment at the Induction Ceremony of the Street Project Foundation Creative Youth Boot Camp held on Monday 25, 2016 endorsed the program fully. He stated, “ We will also explore more areas of opportunity with Street Project Foundation and see how the ministry can create an enabling environment to make sure the program is sustained.”

Also at the ceremony was the Public Affairs Officer, Department of State, United States of America, Mrs. Dehab Ghebreab. In her speech to the inductees she mentioned that it was critical for society to have youth that are interested in the art, who can convey messages that are important.

The Founder & Lead Visionary of Street Project, Mrs. Rita Ezenwa-Okoro who also is a 2014 Mandela Washington Fellow, stated that the goal of the Boot Camp is to train 100 talented young people from low-income backgrounds and the most outstanding will be placed on internships for mentoring purposes. What drives the organization is the belief that young people can make a sustainable living doing what they love.

Rita also added “This initiative could only be made possible by the passionate commitment and selflessness of the Street Project Team, Eduvielawhe Ogoro our Operations Director and Chidi Ikwagwu our Talent Scout who work tirelessly to make sure that the vision of the foundation materializes.