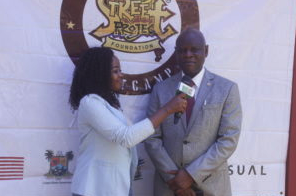 The Street Project Creative Youth Boot Camp began same time last year and has been supported by the United States Consulate and Lagos State Government amongst others. The Participants after completing the program are given Internship opportunities with mentors in their chosen field.

The Street Project Creative Youth Boot camp is a three-week non-residential boot camp, designed to educate, train, motivate and enable young people from low income backgrounds gifted in the performing arts learn how to turn their talents into an enterprise.

According to Mrs. Rita Ezenwa-Okoro the Founder and Lead visionary of Street Project Foundation,

“The boot camp was created to enable Youths move from Job seekers to Job creators…Like in other developed nations, performing arts is an industry that creates wealth and is capable of reducing the number of unemployed youth in the country”. She also shared several success stories of the Street Project Ambassadors who graduated from the programme in previous years.

2000 Applications were received out of which 103 young people were selected after series of auditions.

In her Welcome address the Lead Visionary gave the inductees words of encouragement among which she shared a quote “A river cuts through a rock not because of its power but because of its persistence” Encouraging them to forge ahead against all odds.

After the Founder’s opening remark, the 2016 Street Project Ambassadors shared their stories;

“My Skills were sharpened both physically and mentally. What I have learnt from my internship would be able to sustain me once I graduate from the University” Chibuikem Chris-Oparah one of the 2016 Street Project Ambassadors said this whilst sharing his testimony.

“Before Street Project, I was struggling with my art and didn’t realize I imitate my role model in my field, Street Project taught me to create an Identity for myself” Mayowa Lamusa another Street Project Ambassador testified.

“Don’t be intimidated by someone else’s talent, what makes you unique is yourself and what makes me unique is Myself” Zipporah Coleman 2016 Street Project Ambassador advice to the new inductees.

“It is alright for you not to know why you are here but open your mind to the possibilities of the things you might get” Deborah Chibueze, 2016 Street Project Ambassador sharing her experience with the new Inductees.

The ceremony, which started with the National Anthem, a slideshow of pictures and videos from the 2016 Creative Youth Boot Camp gave a clue on the performance classes and background of the 2016 Street Project Ambassadors. This was followed by a welcome address by the Founder/Lead Visionary Rita Ezenwa-Okoro, A speech by the Deputy Public Affairs Officer United States Consulate, Mr. Frank Sellin who expressed his happiness on the 2nd Edition of the Creative Youth Boot Camp. The Honorable Commissioner, Lagos state Ministry of Wealth Creation and Employment Hon. Babatunde Durosimi-Etti was represented by Dr.Yakub Olajide Basorun the Permanent Secretary of the Ministry of Wealth Creation and Employment. He assured the 2017 Creative Youth Boot Camp inductees of the opportunity to apply for a loan that will sustain their business under the Lagos State Employment Trust Fund. Also speaking at the event was Mr. Anjorin Odun representing the Honourable Commissioner, Lagos State Ministry of Youth and Social development, Mrs. Uzamat Akinbile-Yusuf.

The induction proper took place when the inductees recited their creed whilst being led by the Director of Operations, Street Project Foundation, Eduvielawhe Ogoro.

The event gracefully came to an end with sessions of group photographs of the newly inducted Creative Youth Boot Campers, the Street Project Team and the dignitaries present.